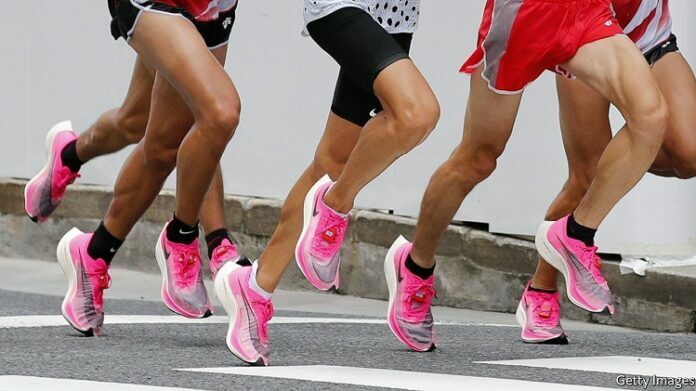 Switzerland’s On is the latest company to introduce the world to a carbon fiber running shoe. They have paired their shoe with a new set of high-tech earbuds, but the shoe itself is the star of the show in On’s partnership with Bang & Olufsen. Now we wait to see how many pairs they sell.

The whole point of sports is to put your physical skills and abilities to the test to see how well you perform. When equipment is made better to the point at which it improves your performance, do your accomplishments still deserve recognition? Sure they do. But perhaps we need a new way of measuring greatness.

As the heel strikes the ground, energy begins transferring forward to the ball of afoot. That energy, traveling through a carbon fiber plate, transfers off the ball of the foot with very little loss. Thus, the runner gets a better forward push and a more efficient stride.

A few records have already been broken with carbon fiber running shoes. That is all well and good. Would those same records have been broken without the technology? That is the sticking point. This is not to say that the new records should have asterisks attached to them. Rather, it is simply to say that the records may not be so impressive when you consider how much carbon fiber might be helping.

The same holds true for other sports as well. For example, being able to hit a driver 250 to 300 yards off the tee isn’t such a big deal in a day and age of carbon fiber shafts. It was a huge deal 30 years ago. So maybe today’s driving experts are not as good as they are made out to be. Carbon fiber clubs enable them to do something they would not have done with aluminum or wood.

Today’s athletes enjoy superior performance thanks to the equipment they now have at their disposal. All of that is fine. But perhaps we should not compare them to athletes of the past. Doing so is like comparing apples and oranges. Instead, athletes with modern technology should be compared to others of the same era. Define greatness that way rather than comparing today’s achievements with those of 20 and 30 years ago. Compare apples with apples on a level playing field.

With all that said, it is fascinating to know that a small piece of carbon fiber reinforced plastic can make running so much more efficient. It is such basic physics that it’s a wonder no one thought of it years ago. But it is what it is, and it is here. We should come to expect carbon-fiber running shoes as the norm for marathoners, cross country runners, track and field, etc. And yes, we should expect new records forthcoming. Just remember that it is not a fair comparison to measure against the athletes of the past who had no such technology.

3 Tips For Making Your Home A Safe Place To Workout

3 Ways To Prepare Your Body For Moving Day

Henry Asher - September 28, 2022 0
Whether you are committed to beating alcohol or opioid addiction, or if you are only playing around with the idea, there is a high...

How to Trim Your Beard Just Like A Professional

Henry Asher - September 23, 2022 0
Beards no longer raise eyebrows in the office or anyplace else, to being a mainstream fashion statement among men. That is mainly due to the...

Five Health Benefits to Owning a Reclining Chair or Sofa

Henry Asher - September 22, 2022 0
Having comfortable furniture in the living room or family room is a good way to relax after a hard day at work. With a...

Henry Asher - September 1, 2022 0
Generally, emergency dental care is needed to help those patients who are suffering from unbearable dental pain or those who have severe dental problems....